We’ve had some features in the queue for a while on the QA401 that made it out in the 1.50 release. Remember, the goal with the QA401 isn’t the be-all-end-all audio software. There are plenty of applications out there that will do the room response measurements, speaker characterization, etc. What we aim for with the QA401 is basic audio measurements quickly and accurately. Think of it as your DVM for audio: THD, frequency response, gain….on discrete gain stages or 200W class D amps…with zero calibration and killer noise and distortion floors. In keeping with that philosophy, the 1.50 release adds the following:

Quick graphs of frequency response and THD. Previously, the swept measurements were saved to a CSV file so that you could plot the data in your preferred graphing tool. This release will let you see the data without having to fire up your graphing tool so that you can quickly decide if you are “there” or not. Now, the reason we were hesitant to include graphing from the start is that it’s a slippery slope: Once you have a basic graph, the next question is “can I edit axis titles” or “I’d like to change the scale.” But the underlying component used for showing the graph is pretty potent in that you can readily pan around the graph, and if you get the hang of things you can pan and zoom to let you see what you want to see. We won’t make many enhancements to this basic graph. But hopefully this makes it easier to see where you are without having to interrupt your design workflow. 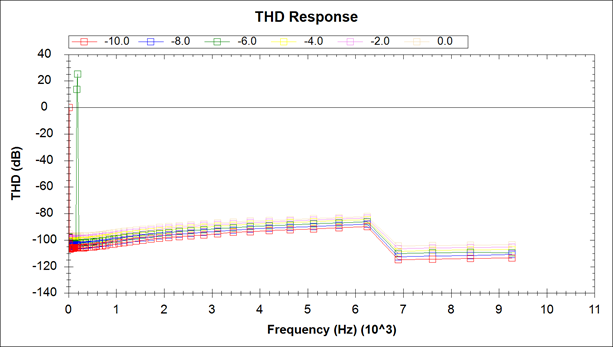 The QA401 works well when the device you are measuring has an audio in and an audio out port. That makes it very easy to measure how the device-under-test (DUT) might distort a waveform. But another common scenario that hasn’t be possible to date is  the automated measurements of a device that creates its own sound, such as an audio DAC. Of course, it’s a simple matter to load up a series of reference test tones and play those and manually measure the THD. But for automated measurements, it’s required that the test equipment can tell the DUT to change frequency and amplitude. This is supported in the 1.5 release. The 1.5 release allows the QA401 signal generator settings to be mirrored on the primary PC audio device. 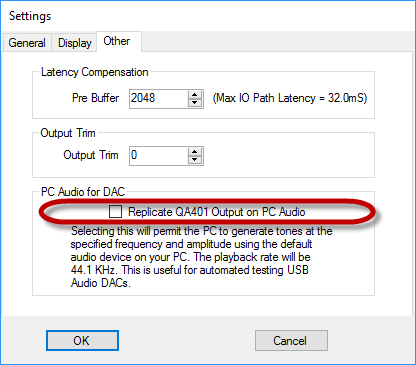 When the “Replicate QA401 Output on PC Audio” is checked, the QA401 will output the same audio (Gen1 only) on both the PC primary sound card AND the QA401. When you adjust the frequency of the Gen1, the output will change on the PC. Same with amplitude.

Now, there’s a conceptual problem to wrestle with for amplitude. On the QA401, the levels are absolute. But on the PC, they are not. There could be a calibrate process to help with this. But when using this mode, it makes the most sense to do it with DBFS selected. A 0 dBFS signal will be max amplitude the PC. From there, you can scale in dB as needed. We will look into calibration methods in the future, but just be aware this is why we avoided the PC Audio path from the beginning: There’s no concept of absolute on a PC. Any application can do whatever they wish with a myriad of volume settings, filters, etc. You never know what you are getting. Beware.

This adjustment is on the Settings -> Other tab. Here, you specify the pre-buffer size (in samples) and you can see the maximum latency that can be compensated. The maximum is 670 mS. 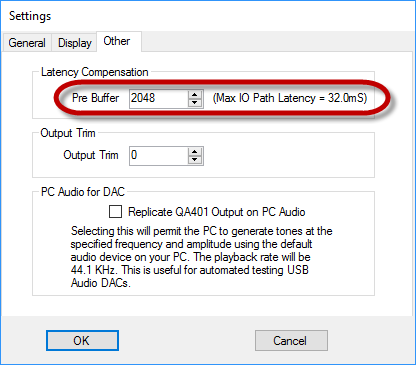 The output of the QA401 is DC coupled. Normally, you might measure 1-2 mV of offset at any single port. The source of the offset is two-fold. The first is offsets in the DAC, and the second is offsets in the output amps. The output amps are OPA1612, which have a nominal offset of +/-100 uV. The much larger source is the DAC. The 1.50 release allows the DAC to be trimmed manually to get the offset as low as practically possible. This was important to those working on very sensitive high-gain stages. 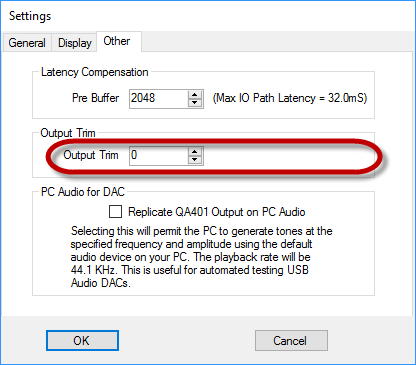 Without question there is some more polishing needed on these features, but it will come in time as issues are raised. Send us a mail and let us know.